Do more power-saving with the SAMD21 chip on the TinyScreen+!

Do more power-saving with the SAMD21 chip on the TinyScreen+! 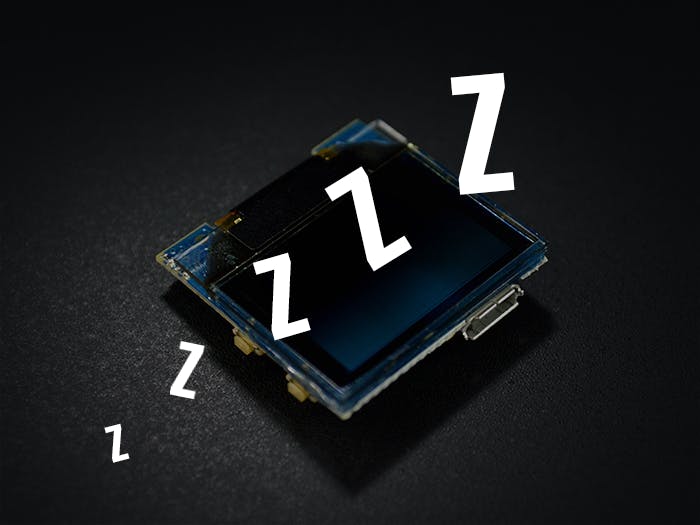 It is no secret that the OLED display screen on the TinyScreen+ can use a lot of power, and sometimes power preservation is very important for a project. This tutorial includes a program that uses the Arduino RTCZero library in order to wake the TinyScreen+ from sleep mode by pressing one of the four on-board buttons. As a bonus, the example will show how to display the date and time using the SAMD21 internal Real-Time Clock.

This tutorial has it all!

The TinyScreen+ power consumption is determined by what is displayed on the screen. For a normal screen with a black background and white text (like for the program in this tutorial), the TinyScreen+ will consume 16-20mA on average - keep in mind that this is when there are no other TinyShields connected to the TinyScreen+. More boards will draw more power.

If you were using a TinyTV and playing videos from an SD Card, you would have a power consumption range between 40-90mA. This is an absurd range because of the variable pixel colors in different videos. If you were to play a mostly black background video you would be drawing around 40-60mA, whereas a colored background would draw anywhere from 55-75mA, and a white background would draw between 70-90mA. Darker colors draw less current, and lighter/whiter colors draw the most current.

110µA is drawn when in sleep mode - so in the included program when the TinyScreen+ display is turned off it is only drawing around 0.1mA which will help prolong the life of the battery connected, and the length of time you can use your project wirelessly.

Plug the TinyScreen+ into your computer with a micro USB cable. Make sure the power switch is turned to on! Open the TinyScreen+ RTC & Interrupts Arduino Sketch in the Arduino IDE.

After uploading the program, the screen will appear blank - this is correct! Press a button to trigger the interrupt attached to the four buttons on the TinyScreen+ to "wake" the screen. The display will turn on for one second and show the date and time, then turn back off.