A radiant leaf necklace made almost entirely of LEDs, powered by a TinyDuino.

A radiant leaf necklace made almost entirely of LEDs, powered by a TinyDuino. 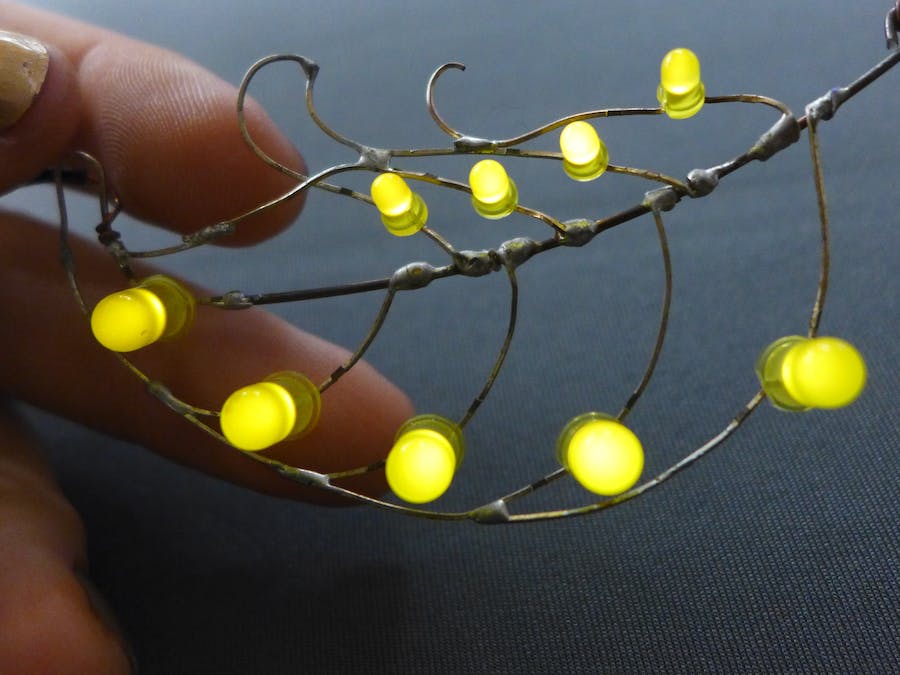 San Francisco recently played host to two different light-themed parties, so I dug up my soldered LED leaf to wear. It's suspended on two wire leads, which provide power.

In the past, I've always worn it simply, with a 3V coin cell taped between the wire leads. This time, I tried to make it easier to turn on and off by adding alligator clips that gripped the battery, with some areas covered by tape so it wouldn't short.

But that didn't work well, and since one event was a blinky light party, I found a better solution. I've got the Arduino "Blink" test function loaded on my TinyDuino, so I soldered the leads to a protoboard and plugged it in. This is much more structurally secure than the previous methods, and it even adds programmable light patterns! Fantastic!

I had a little trouble reading the pin labels on my protoboard; as you can see here, they overlap the pin dimples a bit, and these boards have been rattling around in my project boxes since the Kickstarter ended. But by squinting at the image linked above, I was able to find pin 13 and ground.

Now, I can easily turn the thing on and off by inserting or removing the coin cell. (I used a CR2032, which is too big but all I had on hand. I don't recommend this, but it works!)

Unfortunately, since it's soldered together, I can no longer get the thing over my head. But it's actually more convenient and attractive this way – I just tucked the 'Duino and wires into my dress, which looks less weird than you think... Since the dress has a high, narrow collar, the leaf appears to hover without suspension near my collarbones, and I can easily put it on and move without disrupting the circuit, plus all the controls are in the front.

Here's how it looks during the "on" phase; the LEDs look a little wonky, up close, but this placement sends the light in more directions and corrects for s spacing oddities.