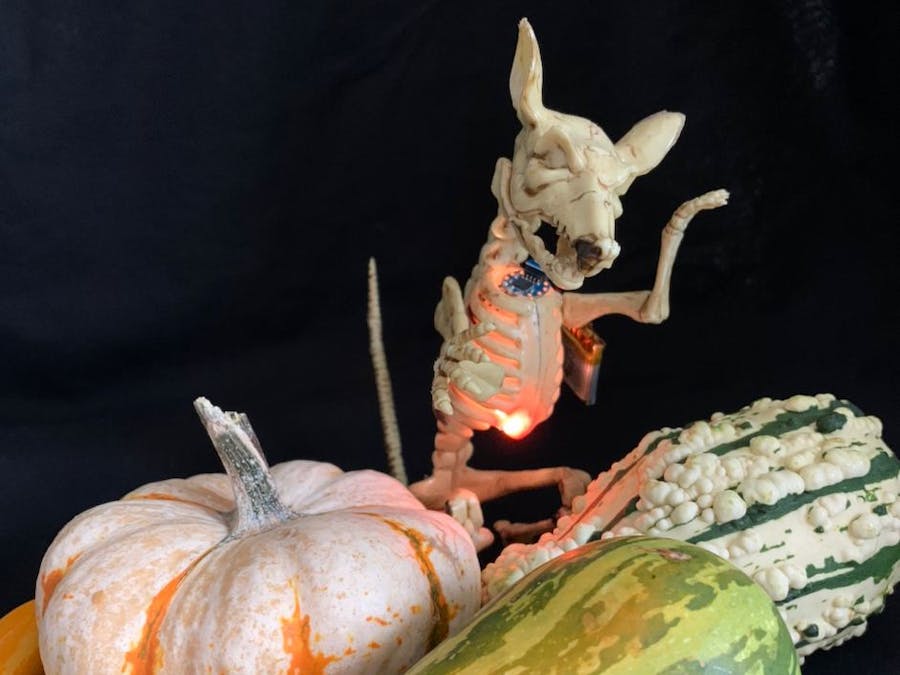 It is time to get spooky for Halloween, Samhain,  and Día de muertos! This LED Fire Effect can help make your decorations last longer and be less fire-reliant! So grab a Jack-O-Lantern, spooky decoration, or 3D print something to LED-ify.

If this is your first time using TinyLily wearable/e-textile electronics, be sure to check out the TinyLily Processor and TinyLily RGB LED tutorials for some background!

To make sure you get everything you need, I recommend getting the TinyLily Starter Kit that includes everything above and more!

Connect either one of the power (+) and ground (-) tabs to the power and ground on the TinyLily RGB LED, and then you can choose any of the GPIO pins available on the TinyLily to connect to the IN tab of the LED. I used pin 3 for this project, as can be seen in the above image. You can use any pin, but make sure that if you use a different pin that you change the program to reference that pin!

To make the library usable for Arduino, you have to rename it, as noted in the README on the GitHub page of the library. But I already did that so you can download a ready-to-work copy in a zip file here:

After you unzip the library, move it to your Documents/Arduino/libraries folder so that your Arduino sketch program can use it.

There is a fire effect example that comes with the library, and all you need to do to get it working is changing the pin, and the amount of LEDs. A copy of the code I used can be found attached to the bottom!

Download the program zip file, and open it in the Arduino IDE. Connect your TinyLily processor to your computer using the TinyLily microUSB adapter, and a microUSB cable.

Make the correct tools selections to program the board:

And click the Upload button to upload the program.

Animation of the flickering LED

Tuck away the electronics to make your decorations even spookier! In the above gif, the TinyLily processor can be seen at the top of the decoration rat's rib cage so that you can see where the hardware is!

The default brightness for the attached program is set to 128 out of a scale of 255, so the LEDs are set to 50% brightness. This was done to save power in my case, as will be discussed later on. If you want your LEDs brighter you would edit the line:

I chose to use the typical colors for a candle flame included in the fire effect example, but there are other effects available in the program.

If you want to go more in-depth, you can change the individual colors using a color palette function referenced in the library. You can see all of the Predefined RGB colors in the header file pixeltypes.h starting at line 594: https://github.com/FastLED/FastLED/blob/master/pixeltypes.h

There are a LOT of colors.

There are two lines in the fire effect program you can adjust the values of to create a desired speed/flame effect:

Depending on what effect you are trying to achieve, you may end up changing both of these values.

You can make your project last longer by using a bigger battery, turning down the brightness of your LEDs, or adding in some power control like a switch so that you're only using power when you choose.

No matter what,  it is good to know roughly how long a project will last before you need to recharge, change batteries, or unplug it to conserve power. The current draw of the RGB LEDs depends on colors and brightness:

With one RGB LED, we have around 65mA to supply in the worst case of displaying white at the brightest setting, depending on your battery this might not last long at all. Fortunately, there is a mixture of colors for this example which lessens power consumption a lot, sometimes by half.

The brightest setting of these LEDs is extremely bright and difficult to look at, which is great because more brightness draws more power. The power and color of the LEDs is controlled using Pulse Width Modulation (PWM) on a range of 0-255. 255 is the max brightness of 100%. 0 will visibly turn your LEDs off, but a small amount of current will still be supplied (around 1mA.) The duty cycle directly correlates to the power consumed, so at around 50% brightness  or 128 duty cycle (referenced as BRIGHTNESS in the program) draws in the worst case, that puts the power consumption of my program at 65/2 = 32.5mA.

So I know with a full charged 150mAh battery that I will have around 150mAh / 32.5mA = 5 hours of time for my rat decoration candle to remain lit. Plenty of time for trick or treating!