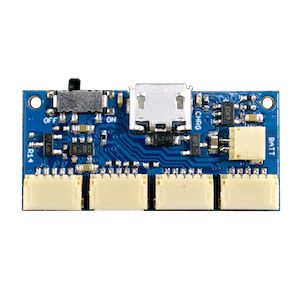 WirelingZero is one of TinyCircuits' second-generation processor boards, specifically designed for low-cost Wireling projects. WirelingZero is based on the Atmel SAMD21 32-bit ARM Cortex M0+ processor (the same one used in the Arduino Zero) and provides a USB connectivity port, power management and battery charger in a single 15x32mm board. Note: The battery is not included and is sold separately.

This tutorial will cover the basics on how to create a sprite using a bitmap, and how to program the sprite to move around on Arduino.

This project is great for backlighting monitors, or adding customizable LED strips to a PC tower that you can customize with a few inputs!

One of the best ways to understand cardiogram data is to view a pulse graph!

In this tutorial, you'll learn how to make a Christmas tree ornament that is able to "sing" ten different Christmas carols!